Donald Trump fired another volley in what has become an all-out rhetorical war between the president and four progressive Democratic congresswomen Tuesday morning, accusing them of “spewing some of the most vile, hateful, and disgusting things ever said by a politician in the House or Senate.

He also accused the Democratic leadership of giving them a “free pass.The early Tuesday tweets come less than 12 hours after the four legislators, Ilhan Omar of Minnesota, Alexandria Ocasio-Cortez of New York, Rashida Tlaib of Michigan, and Ayanna Pressley of Massachusetts, held a press conference asking that Americans “do not take the bait” of Trump’s divisive rhetoric, after 24 hours of racist attacks on them by the president.

Stoking the flames, lawyer George Conway, the husband of counsel to the president Kellyanne Conway, wrote another scorching opinion piece saying: “Trump is a racist president. The article was published in the Washington Post on Monday evening, in which Conway concluded that Trump’s remarks this week crossed a line for him.

“Naivete, hostility and outright racism, roiled in a toxic mix, have given us a racist president … telling four non-white members of Congress – American citizens all, three natural-born to “go back” to the “countries” they “originally came from”? That’s racist to the core,” he wrote. SEE WHAT HAPPENED TO MAGU IMPERSONATOR ON SOCIAL MEDIA
The highly public war of words in Washington began with Trump’s racist urging that the “progressive Democrat congresswomen” should “go back” to the “crime infested” countries they came from, prompting condemnation in the US and across the world. Three of the legislators were born in the USA, while Omar came to the country aged 12 as a refugee and took up American citizenship five years later.
The Democrat-controlled House will vote on Tuesday evening to condemn Trump’s initial remarks, which House speaker Nancy Pelosi described as xenophobic.
“The House cannot enable the president’s characterization of immigrants to our country to face,” Pelosi wrote in a letter to lawmakers.

Trump seemed to address the impending vote in his morning comments asking: “Why isn’t the House voting to rebuke the filthy and hate laced things they have said Because they’re the novel Left, and therefore the Democrats ar afraid to require them on.

The only comment Trump proffered of evidence of “filthy” comments from the legislators was a reference to Tlaib’s use of the word “motherfucker” in a speech shortly after her election in 2018. 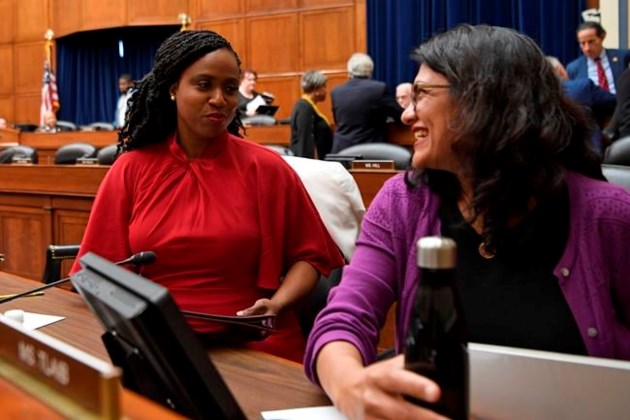 Trump himself is an avid user of profanity, a point Omar made in Monday evening’s press conference, detailing a list of vulgar comments Trump has made publicly and privately about women, people of color and African nations.

Omar also sparked a row in February after remarks that critics ripped as anti-Semitic and for which she apologized. BHARI VS ATIKU WITNESS OPENS UP

Trump’s latest salvo against the four legislators, who have become known as “The Squad” on social media, also accused the Democratic party of giving them “a free pass and a big embrace”. This characterization ignores the fact that, before Trump began taking shots at the four legislators, they were primarily in the news over intra-party squabbles with Democratic leadership.

And the bulk of the Republican party in Congress, including GOP leadership, have allowed Trump a “free pass” to deliver racist broadsides to the congresswomen on Sunday and Monday.

Meanwhile, political observers still wrangle to make sense of Trump’s insults and debate whether they are a product of some grand strategy or the heartfelt utterings of a generally unfiltered president. In either case, the effect won’t change – and as several analysts told the Guardian, it’s an effect that could bolster his re-election chances.

Seven People died as a result of a collapsed building

What does love means to you?