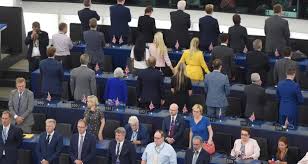 Labour’s leader in the European parliament, Richard Corbett, later described the move as pathetic.
Advertisement More than three months after Britain was scheduled to leave the EU, 73 British MEPs have arrived in Strasbourg to take up a mandate that is due to expire on 31 October, the new deadline.

The Brexit party’s 29 MEPs marked their arrival in Strasbourg, with a photo underneath the 28 national flags outside the Strasbourg parliament. A few wore turquoise ties, the colour of the party intended to mark the difference with Ukip purple, Farage’s old party.

Farage, who has been an MEP since 1999, said Brexit party MEPs would stay beyond 31 October “if we have to stay longer” and delivered a carefully-crafted message to the two Conservatives battling to become prime minister, Boris Johnson and Jeremy Hunt.
“Now we have two contenders telling us whatever happens, come hell or high water we are leaving on the 31 October,” he said. “I don’t believe a word they say but I will give them this warning: if they don’t deliver Brexit on that date they are toast and then we will then see a turquoise takeover.”
His new MEPs cheered as Farage claimed the Brexit party was the biggest in Europe. While the 29 Brexit MEPs are the joint largest party in the European parliament (along with Germany’s CDU-CSU alliance), Farage has been unable to forge a pan-European group, meaning he will no longer have a prime-time speaking slot in European parliament debates. 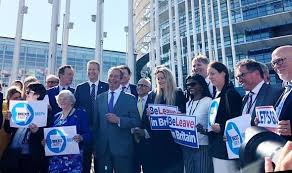 Massing on the other side of the parliament, the Liberal Democrats also trumpeted their arrival by walking into the chamber together wearing yellow T-shirts emblazoned with their campaign slogan Bollot to Brexit. The party has a record 16 MEPs, while Labour and the Conservatives have been reduced to all-time lows.

The MEP denied the crude slogan was unparliamentary. He said that, when he met MEP colleagues who told him he would only stay a few months, “I say no. ‘I am here for five years. Bollocks to Brexit.’ And I get the same reaction every time: a big smile. It’s amazing how well Bollocks to Brexit translates into 24 different languages.See Awolowo’s son in BBNaija